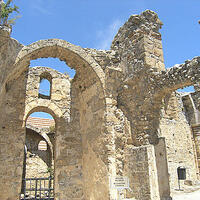 This is Northern Cyprus, where Lawrence Durell wrote Bitter Lemons, where intercontinental Religious routes intersect, which was bought by the Knights of the Temple, which is the subject of the book, Da Vinci Code, from Richard the Lion heart  for 100 thousand gold coins year and in which they maintained sovereignty for a year.

Saint  Paul, who was the promoter of Christianity and ensured the spread of this religion, twice visited Cyprus. The first place he stepped foot at, and gave a sermon to the public in North Cyprus was in the ancient city of Salamis close to the well known historical city of  Famagusta. Various western documentaries have been made on the theme of “ St. Paul’s Footprints”. The city square in which Paul Addressed the public is still standing. You could tread upon the stones Paul walked on and breathe the same air at Salamis open to the visitors.

St Barnabas was one of the founders of the independent Greek Orthodox church, and is the patron saint of Cyprus.   He, was born in Salamis to a Jewish family of the Levi clan, (the Levites from which the priests of the temple in Jerusalem were chosen), who had emigrated from Syria to Cyprus. He was originally called So sis, a variant of Joseph. The St Barnabas monastery and Icon museum is situated close to the Royal tombs and the ancient city Salamis, North Cyprus. The site consists of a church, now serving as an icon museum, the monastery, now housing an archaeological collection, and a chapel housing the remains of the saint.

One of the important philosophers of the Christian world who was also a saint, St.Hilarion lived and died in, and a chapel belonging to the 11th century at the castle. St Hilarion Castle is 732 meters above sea level  and is one of the 3 mountain castles in the   North Cyprus and there are Presentation Room, Barbikan, Pantry, Workshop, Kitchen, Royal Palace, the Cistern , Prince John's Tower and the Byzantine Church at the castle.

You could find many trace and hint to find path of Christianity in North Cyprus. Please visit  historical spots folder at the home page button: "places to visit" at this web site.

Hundreds of visitors visit Shaykh Nazim each month at his home and Dergah in Lefke, North Cyprus where followers from every country come to share in the blessings of this living Sufi Master. Shaykh Nazim, now in his nineties, still greets his visitors and allows time to meet with most persons coming to see him.